Top 3 Fun Facts about St. Patrick’s Day to Share with your Students

Learn why we wear green for St. Patrick’s Day, and more!

Every year on March 17th, folks from all around the world celebrate St. Patrick’s Day with parades, four-leaf clovers, and of course, the colour green! Today, we are highlighting our favourite fun facts about this holiday that you can share with your students.

Patrick was a real person!

This holiday first began as a religious one, celebrating St. Patrick, the patron saint of Ireland. He actually wasn’t born in Ireland, but was brought over from Britain in the 4th century to work in the country. There, he discovered Christianity, and began teaching others about religion through the establishment of monasteries, churches, and schools. He would use the shamrock–a three-leaf clover–to explain the Holy Trinity. The infamous four-leaf clover isn’t actually related to him, it’s just a symbol of good luck! March 17th is the day he passed away, and has since been a day of celebration.

Every year, Chicago dyes its river green to celebrate!

From these roots, St. Patrick’s Day has since developed into one about celebrating Irish culture. Since the 17th century, many Irish immigrants moved to the United States, and with them they brought their traditions. These festivities grew more and more elaborate, and now include city-wide celebrations all over the world! In New York, the first St. Patrick’s day parade was in 1762. Since 1962, the Chicago River in Illinois has been coloured green! These are a few examples of the many exciting events that happen for St. Patrick’s Day!

We wear green to hide from Leprechauns! 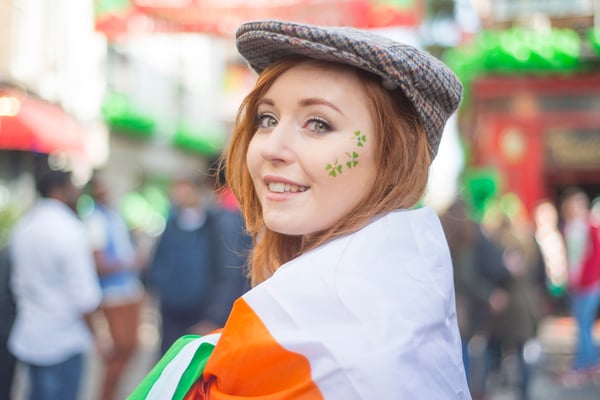 There are many reasons we wear green for St. Patrick’s Day, and protecting ourselves from sneaky leprechauns is one of them! Leprechauns are small fairies in Irish folklore, and legend has it that they like to pinch people. The best way to defend yourself is by wearing green, which is invisible to leprechauns! It’s also been said we wear green to reflect Ireland’s national symbol, the shamrock, as well as to represent the beautiful green Irish landscape. Nowadays, folks wear green on St. Patrick’s Day to honor their Irish heritage, and to join in on the fun!

Are your students interested in learning more about history and culture from around the world? Check out our itineraries for our educational tours to Europe!

Stay In The Know!